The person who sent me this link swears it's become the most popular screen saver in the U.S.A. Well it's hours of fun for a girl or a boy, I'll say that much. Click and drag for acceleration. 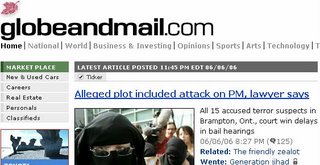 "Help, help!" cried Piglet, "a Heffalump, a Horrible
Heffalump!" and he scampered off as hard as he could, still
crying out, "Help, help, a Herrible Hoffalump! Hoff, Hoff, a
Hellible Horralump! Holl, Holl, a Hoffable Hellerump!" And he
didn't stop crying and scampering until he got to Christopher
Robin's house.

"Whatever's the matter, Piglet?" said Christopher
Robin, who was just getting up.

"Up there," said Piglet, waving his paw.

Today, I was backing out of my friend's parking spot into the alley behind her triplex. I checked all around before moving the car and was looking directly out my back window as I eased out. My friend Alice was in the passenger seat and happened to notice a kid of about 9 on his bike turning right into my path, totally oblivious to the fact my car was now moving. Alice yelled at me to stop and I did, just in time. The kid kept going without batting an eye, just about a foot away from the back of the vehicle. Close call. I easily could've hit him.

But I didn't. And here's why I bring it up. There are close calls every day. The fact is, nothing happened with any three tonnes of bomb-making material someone was trying to get their twisted little hands on. They didn't even come close to pulling it off (whatever the intention was, and who's to say at this point anyway?)

In the four days since the arrests, I have spoken to dozens of people. I went to a family birthday party for my father in law. I visited my own parents. I have spoken to plenty of friends and colleagues at work. None of us ever thought to even bring it up in casual conversation. I take public transit to work and have not even encountered anyone else discussing it.

But the mass media (and blogworld, of course) is perfectly - and relentlessly - breathless, poring over the details like giddy teenagers recounting the juicier bits from the prom. Over and over again. It's almost as if you're a nobody in Toronto if you weren't some assholes' potential target.

As the Wonderdog concluded, it's time to grow up, people. Nothing happened. No CN towers came crashing down; no CSIS headquarters got huge chunks blown out of them; unlike forty years ago, our mailboxes are intact. Nobody even so much as got a hangnail.

So relax. Have a cream soda.

CathiefromCanada knows the score. For what it's worth, this is what I said when Harper first promised to re-open the Same-Sex Marriage debate last November:

I'm sure a lot of Canadians miss the family squabbles over this as much as I do. For the upteenth time: Gays' existence is a reality. Gay marriage is a reality. Gays deserve equal treatment, which means they cannot be barred from marriage. It's protected under the charter. Seven Supreme Courts and the majority of Canadians agree.

This is not an issue that needs re-opening, and surely not a priority. It was part of the party platforms of the Bloq, the NDP, and the Liberals for the last two federal campaigns. It was hashed-out in Parliamentary commissions and debates for years. This dog is done hunting and should wile out the rest of its days with the Death Penalty dog.

One question though: how come non-life threatening things require Parliament to debate and vote on them again and again, while others that do involve life and death consequences need none at all? Oh right, I keep forgetting: it's because the Right are a bunch of shameless hypocrites. How silly of me to forget.

(Thanks for reminding me, Simon)

Shoot him, throw a shovel off, there you go

"When the IEDs went off, the ...practice was to basically shoot up the landscape - anything that moved. That kind of thing would happen a lot."
--Michael Blake, U.S. Iraqi war veteran (BBC airdate: March 29, 2006)

US military prosecutors plan to file conspiracy and murder charges against seven enlisted Marines and one Navy corpsman for the alleged murder of an Iraqi civilian and subsequent cover-up on April 26 in Hamandiya,...
--The Jurist, June 2, 2006

"Keep shovels on your truck, or an AK (rifle). If you see anybody out here at night, shoot him, and if they weren't doing anything, throw a shovel off (like) they were digging an IED or whatever... Shoot him, throw a shovel off, there you go."
--Jody Casey, U.S. Iraqi war veteran, describing his training instructions from other U.S. soldiers upon his arrival in Iraq (BBC airdate: March 29, 2006)

"Criminal investigators are hoping to exhume the bodies of several Iraqi civilians allegedly gunned down by a group of U.S. Marines last year in the city of Haditha, aiming to recover potentially important forensic evidence, according to defense officials familiar with the investigation. The possible evidence was disregarded at first because the slayings originally were not treated as crimes."
--The Washington Post, June 2, 2006

"I scraped dead bodies off the pavement with a shovel and threw them in trash bags and left them there on the side of the road, and I really don't think the anti-war movement is what's infuriating people... The only thing that kept (my morale) up was the fact that people were at home talking shit on the wrongs that I had to commit for this government."
--Joe Hatcher, U.S. Iraqi war veteran (BBC airdate: March 29, 2006)

"...the United States military does everything that it can to avoid civilian casualties, to limit the impact of any military operations on the civilian population and, most importantly, to take action where our soldiers do not follow the rules."
--Tom Casey, U.S. State Department spokesman, June 2, 2006)

"We acted inhumane; and a lot of soldiers down there are very inhumane. Total disregard for human life. That's why they call (Iraqis) Hajji. You've got to desensitize yourself to (the Iraqis). They're not people - they're animals. Then you watch it get covered up and shoved under a rug and you know: 'Oh, that didn't happen'. I seen innocent people being killed. IEDs go off and you just zap any farmer that's close to you... They basically jam into your head: 'This is Hajji, this is Hajji...' You totally take the human being out of it and you make them a video game, a target... If you start looking at them as humans,... how are you going to kill them?"
--Jody Casey, U.S. Iraqi war veteran (BBC airdate: March 29, 2006)

The Ishaqi investigation concluded that the allegations of intentional killings of civilians by American forces are unfounded.
--Un-named Senior Pentagon official, paraphrased by ABC News, June 2, 2006